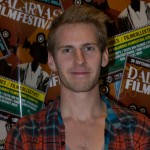 Filmfestival Dalarna: Crazy Pictures is a film corporate in Norrköping. The group is most known for making short films. Their latest production is called the Blue Man. Albin Petterson is one of the members. Today he visited Dalarnas Filmfestival and held a lecture with a lot of good tips about filmmaking. His advice to young filmmakers: -Do not be afraid to put productions out on the Internet, because that is what creates interest.

This site uses Akismet to reduce spam. Learn how your comment data is processed.